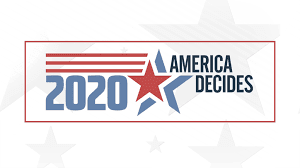 We take an overview of the upcoming Nov. 3rd Election, recognizing there's plenty of important races being decided other than President. We hear from the candidates in the 3rd Congressional District, longtime Democratic incumbent, Ron Kind, and Republican former Navy Seal, Derrick Van Orden and the 7th Congressional District, Republican Congressman, Tom Tiffany, and Democrat, Tricia Zunker, whom he defeated in the May Special Election to win the seat. We also hear from the candidates in the 10th State Senate District, Democratic incumbent, Patty Schactner, and Republican Assemblyman, Rob Stafsholt. And while there are many Assembly races in our listening area, the sole Assembly District we highlight is the 67th, as we hear from GOP incumbent, Rob Stafsholt, and Democrat, Chris Kapsner.
Posted by Mark Halvorsen at 9:59 AM