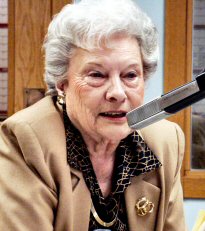 "At Home with Mabel Louise," a special program from December 31, 1973, the first anniversary of wwib. Of course, a first anniversary was not so much noticed in those early days of the ministry, but there was an anniversary! In this program Mabel Louise describes her wedding day, when she and Rev. Warren Steward were married in a church down in Missouri. It was their wedding anniversary that day.

The "At Home" format with announcer Peter Lokken and special music was how Mabel Louise recorded her program for many years to be heard twice daily at 103.7. These days, she comes right into the studio to share with you, live on-the-air, and then we record her for this podcast too!