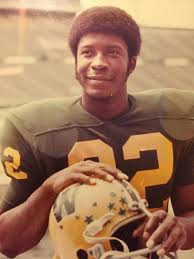 Tony Nathan was a star running back for Birmingham's Woodlawn High School in the racially charged 1970s. His story is told in the major motion picture called "Woodlawn". Tony joins Greg to talk about the showdown between his Woodlawn high school and rival Banks High that drew a record more than 42,000 fans in 1974. Part 2 of a series.
.
﻿
﻿
Posted by Greg Steward at 1:11 PM